Please click this button to join the Session at 19:20 (Not Earlier!)

Sadly the recording of our conversation did not work - most probably I forgot to click he correct button at the right time - my apologies! Here are the review questions and answers:

1. In the Book of Exodus, God brings judgment on the gods of the Egyptians. How does

Answer: The Book of Exodus reveals God’s judgment on the gods of the Egyptians in the ten plagues. In the first plague, God turns the waters of the Nile into blood, showing his victory over the Egyptian god Hapi, who governed the Nile. In the second plague, the plague of frogs, God mocks the frog goddess Heket. In the fifth plague, God destroys the cattle, judging the bovine gods Apis and Hathor. Finally, in the ninth plague, God covers Egypt with a plague of darkness for three days, upstaging the sun god Ra (Exod 10:21–29).

2. What, according to the study, was the main purpose of the Exodus?

Answer: God’s goal in the Exodus was not just to lead his people out of physical bondage, but to lead them out of spiritual bondage. During their time in Egypt, the Israelites ad- opted the religious practices of their captors. They were worshipping idols, the Egyptian gods, and God had to break them of that idolatry. God says this explicitly through the prophet Ezekiel (Ezek 20:6–9).

God also makes his intent clear in Exodus 7:16 when he instructs Moses to tell Pharaoh on his behalf: “Let my people go that they may serve me in the wilderness.” “Serve” is the key word here because, in Hebrew, the words for “serve” and “ministry” are related. They both have liturgical connotations. God wants the Israelites to serve and worship him, not the false gods of Egypt.

3. What is the significance of the Israelites bowing in worship before the Egyptian god Apis?

To prepare for the Eighth session:

In your prayer time this week, contemplate on this scripture: When Moses went and told the people all the Lord’s words and laws, they responded with one voice, “Everything the Lord has said we will do.” (Exodus 24:3)

Review of the Sixth Session

Thank you all for your contributions to the discussions. Notes will be placed here after the session.

You might also like to watch Bishop Robert Baron's talk on Dei Verbum which takes a deep look at how the Bible was authored, and to what extent is it a literal book?

To prepare for the Seventh session:

For God so loved the world, that he gave his only-begotten Son, that all who believe in Him should not perish, but shall have eternal life. (John 3:16)

Review of the Fifth Session

Please find here, my notes of the plenary session - sorry for my handwriting! They are memory joggers only. There is also a recording of the evening, for catch-up.

To prepare for the Sixth session:

When God's Patience waited in the days of Noah, during the building of the ark, in which a few, that is, eight persons, were saved through water, Baptism, which corresponds to this, nnow saves you, not as a removal of dirt from the body but as an appeal to God for a clear conscience, through the resurrection of Jesus Christ.

Review of the Fourth Session

Please find here, my notes of the plenary session - sorry for my handwriting! They are memory joggers only. There is also a recording of the evening, for catch-up.

To prepare for the Fifth session:

Read and meditate on Genesis 3:15. “I will put enmity between you and the woman, and between your seed and her seed: they shall bruise your head and you shall bruise their heels."

Review of the Third Session

Another valuable and constructive discussion evening, thank you to all those present.

Please find here, my notes of the plenary session - sorry for my handwriting! They are memory joggers only. There is also a recording of the evening, for catch-up as some were not able to join us this week.

To prepare for the Forth session:

Read and meditate on Genesis 1:26

“Then God said: Let us make man in our own image, in the likeness of ourselves, and let them be masters of the fish in the sea, the birds of heaven, the cattle, all the wild animals and all the creatures that creep along the earth."

Review of the Second Session

In the second session we discussed:

You may wish to read the scripture passages used again:

At the end of the evening we had the plenary in which each group told us the fruits of their discussion. The file here is a recording of this.

To prepare for the Third session:

“All Scripture, having been divinely inspired, is useful for teaching, for reproof, for correction, and for instruction in justice, so that the man of God may be perfect, having been trained for every good work."

Review of the First Session

The first session aimed to:

To prepare for the Second session:

“And their eyes were opened and they recognized him; and he vanished out of their sight. They said to each other, ‘Did not our hearts burn within us while he talked to us on the road, while he opened to us the scriptures?' "

What is the Bible, where does it come from, and what is its purpose? Is there a 'Catholic' was to read the Bible,  and what story does it tell?

These are the ever-important questions which we will seek to answer on this program. Join us to learn the basic Catholic principles for reading Scripture and to survey the broad outlines of the books of the Bible and their place in the story of salvation.

This course will consist of a series of evenings with a streamed video inspired by the renowned theologian Dr Scott Hahn, followed by small group discussions with a series of questions to guide us. This will all be done using zoom, which allows us all to see each other and to share the content easily. It will be possible to take part using a computer, a tablet or a smart phone (anything which can play YouTube video will do).

The course is twelve sessions in total. It will therefore re-start after Easter on Monday evenings leading up to Pentecost. If in that time we are able to use the Parish rooms in the old priory we will do so - but it will always be possible to take part on line. Each of these Monday evening sessions will begin at 19:30 and will be completed no later than 20:50. There is then an opportunity for those who wish, to join evening prayer on line which we are already saying every evening at 21:00. (There is a link on the home page to this). The gap in between will be useful for social conversation...

Please watch the introductory video below, to acquaint yourself with the style of the inputs, and then decide if you wish to join us on this lentern journey, from Genesis to Jesus.

If you want to discuss further, contact John Andrews - initially by email, or catch me in Church under the old organ loft after 08:00 or 09:30 Mass on Sundays.

Please complete this booking form to register your interest for the program.

From Genesis to Jesus - Introduction

There are no tickets available for this event currently, please come back later

You can order yourself an electronic copy of the  optional participant's pack by clicking here. Although you can also order a printed copy at the same price, we do not recommend this as it would be shipped from USA and might arrive later than would be useful for you! 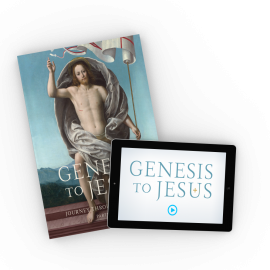