A liturgy suitable for younger children usually takes place during the 9.30am Sunday Mass. Children and parents/ carers will be brought through to the parish hall during Mass where Liturgists will help children hear and understand the Word of God. Please contact Rasti on rmego40@gmail.com if you have any questions or, indeed, would be interested in becoming a Liturgist.

During Advent, we are all getting ready to welcome Jesus into our hearts and homes.  We want to spread the love, joy, peace and hope of Christ to everyone! The attached Advent calendar sets out different ways we can help do that for each day during December as we get ready to celebrate the birth of Jesus over two thousand years ago.

Stations of the Cross

My name is Pontius Pilate. I am the man that the Roman emperor sent to rule over the Jews in Palestine. They were a hard people to please. Once when I tried to put pictures of the emperor in the temple at Jerusalem, the people got very angry. Then the leaders of the people brought this man Jesus to me. They asked me to kill him on a cross. They said that he claimed to be the Son of God. I was afraid. I would not dare try to kill a god. I was even more afraid that the Jewish leaders would report to the emperor that I was a traitor. They said to me; “If this man goes free, Pilate, you are no friend of Caesar.” Well, I let them have their way with Jesus. What would you have done in my place? 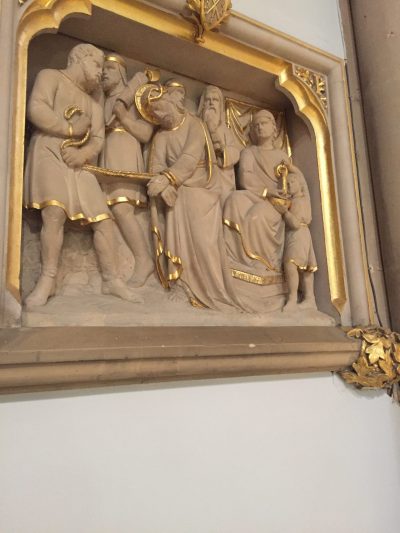 JESUS HAS TO CARRY HIS OWN CROSS

My name is Barabbas, the Rebel. I was in jail with Jesus because I had tried to kill some Roman soldiers. But Pilate let me go free. It was a big holiday in Jerusalem and the Romans used to let one prisoner go free. Some people wanted Pilate to let Jesus go, but the leaders who hated Jesus got their friends to ask for my freedom. I saw Jesus take up his cross without saying anything. I hated my enemies, but Jesus seemed to love the people who were mean to him. What would you have done? 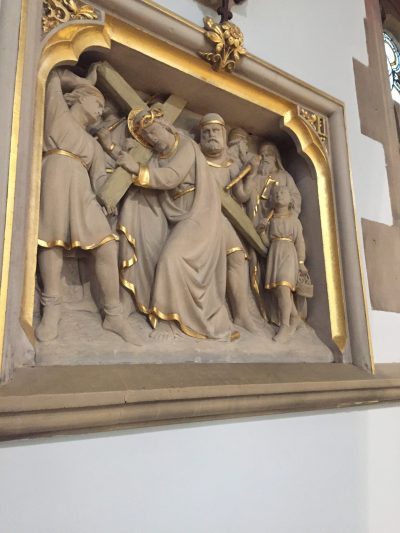 Jesus Takes Up his Cross

Third Station JESUS FALLS DOWN FOR THE FIRST TIME King Herod of Galilee I am King Herod. From a palace window I saw Jesus stumble and fall under the cross. He said once that anyone who wants to be his follower has to take up the cross and follow him. What a strange man he was! Who would ever want to suffer? I like to have fun. I would have saved Jesus if he had worked some tricks, some miracles, for me. I had killed his cousin John the |Baptist. Jesus should have been afraid of me. But he stood there and looked at me. 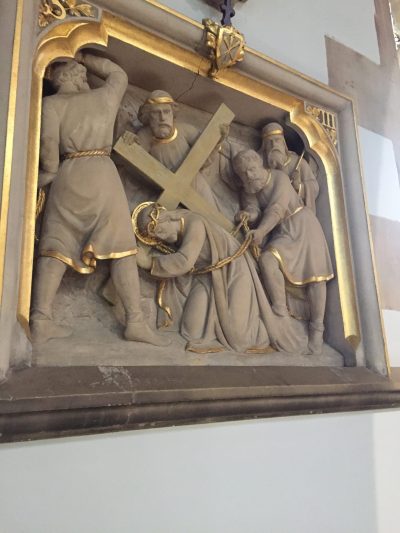 Jesus Falls for the First Time

Mary, the Mother of Jesus

Jesus was my little boy. I held him in my arms in a stable in Bethlehem. I watched him grow up. When he was twelve, Joseph and I lost him for many hours. Finally, we found him in the Temple. He told us that he had to be about his Father’s business. Is this Cross “his Father’s business”? I felt so bad to see him suffer and bleed, but I believe he knows what he must do for the world. I look into his eyes and saw only love, love for me and for you. Isn’t my son wonderful? 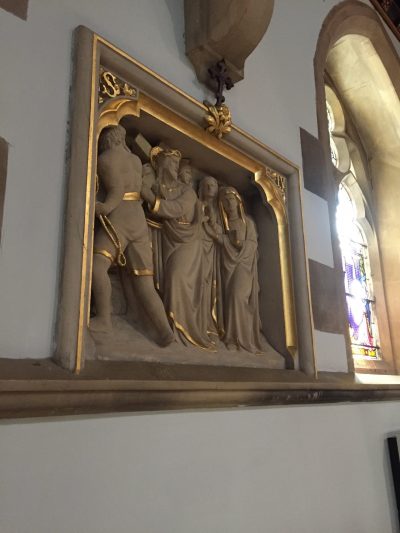 My name is Simon. I am a farmer from the town of Cyrene. On that Friday morning, I had come to Jerusalem from the fields where I worked. I saw a big crowd of people, so I went to see what was happening. All of a sudden, a Roman soldier grabbed me and made me carry the cross for a man condemned to die. I was very angry. I had not done anything wrong. But then I saw the man’s face. His name was Jesus. He smiled as if to thank me. All of a sudden, I was glad to help this poor man carry his cross. After that, I found it easier to help other people who were in trouble. 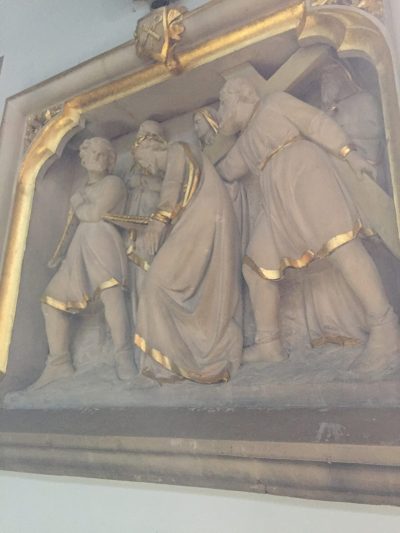 VERONICA WIPES THE FACE OF JESUS

I am Veronica. My home is on the street that leads to the place where the Romans crucified prisoners. I was in the doorway watching Jesus go by. I remember hearing him say, “As long as you give a cup of cool water to the least of your brothers or sisters, you give it to me.” I wanted to help him, so I pulled the veil from my head and I bent down to wipe the blood and sweat from his face. The soldier almost hit me, but I did not care. Jesus looked at me with love and that is all the thanks I needed.

Seventh Station JESUS FALLS THE SECOND TIME UNDER THE CROSS Caiaphas, the High Priest My name is Caiaphas, chief priest of the temple in Jerusalem. People came to me and said, “That fellow Jesus is dangerous. He claims to be God. He says he can forgive sins.” Who did he think he was? He was just a carpenter from Nazareth. I had to protect my country from the Romans. It was better to get Jesus out of the way than to make the Romans angry with us. So I had him arrested. I saw Jesus fall under his cross, and I laughed to myself. He wouldn’t be around much longer, would he? 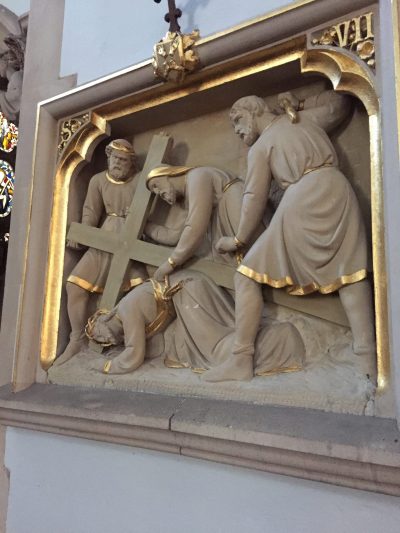 Jesus falls for the Second Time

Eighth Station JESUS MEETS SOME WOMEN OF JERUSALEM A Woman from Jerusalem My friends and I had heard Jesus speak a few times. Sometimes we would bake bread and give it to him and his apostles for a snack. Then we saw him bleeding and wearing a crown of thorns. it was just too much. We started to cry. But he stopped and said. “Don’t cry for me; rather cry for yourselves and for your children!” What could that mean? I didn’t understand a lot of what he said, but I truly believed he was God’s chosen one. Do you believe that too? 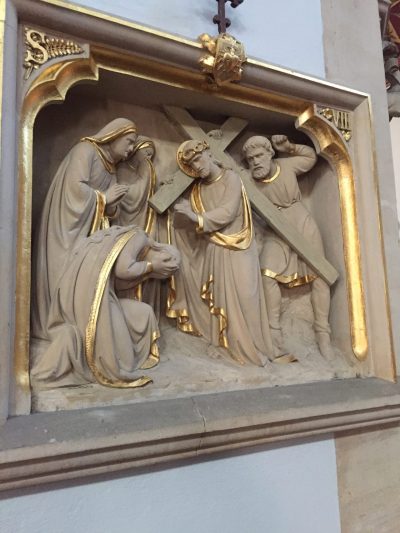 Jesus meets the women of Jerusalem

Ninth Station JESUS FALLS THE THIRD TIME UNDER THE VROSS Longinus, the Roman Soldier I’m the Roman soldier who made a crown of thorns and put it on Jesus’ head. I’m the one who forced him to get up every time he fell under his cross. But I saw how he forgave the people who hit him and made fun of him. When Jesus was on the cross, I asked him to forgive me for being unkind to him. I believe he truly was the Son of God. I hope you believe that too. 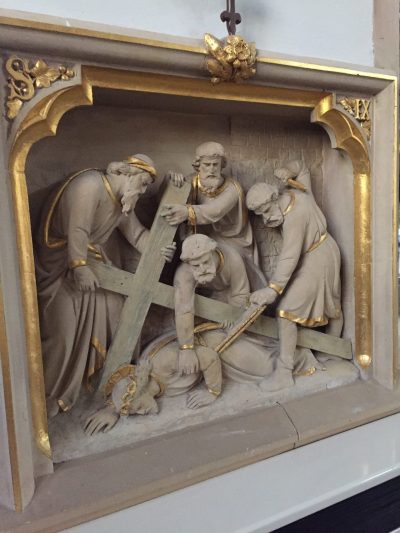 Jesus falls for the Third time

Tenth Station JESUS IS STRIPPED OF HIS CLOTHES The Thief Who Was Not Sorry I’m one of the criminals who was crucified with Jesus. I hated the Roman for arresting me and condemning me to die. This Jesus who was on the other cross – they stripped off his clothes and made fun of him, but he didn’t even answer back. I don’t understand that. To me, he was a wimp. If he was so great, why didn’t he free himself and me? All I wanted was to be free. But he did not do if for me. That made me furious. Wouldn’t you be angry too? 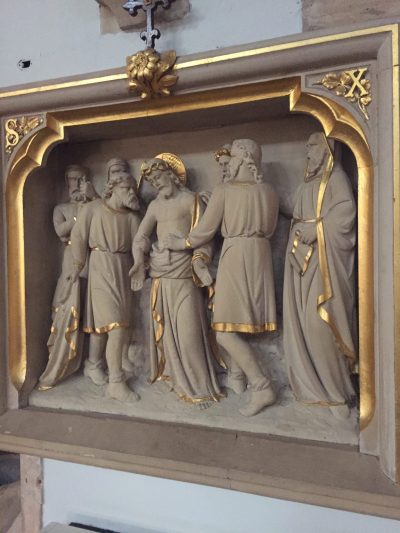 Jesus is stripped of His clothes

Eleventh Station JESUS IS NAILED TO THE CROSS Dismas, The Thief Who Was Sorry My name is Dismas. I used to rob people’s homes until they caught me and condemned me to die next to that carpenter from Nazareth. I watched from my own cross as the soldiers nailed Jesus to his. I was surprised to hear him say: “Father forgive them for they do not know what they are doing.” Then I knew he had to be a great man. Then I knew he could help me too. I looked over and asked him to remember me when he came into his Kingdom. He smiled through his blood and sweat and said. “Today you will be with me in paradise.” I became a believer. Did you become a believer too? 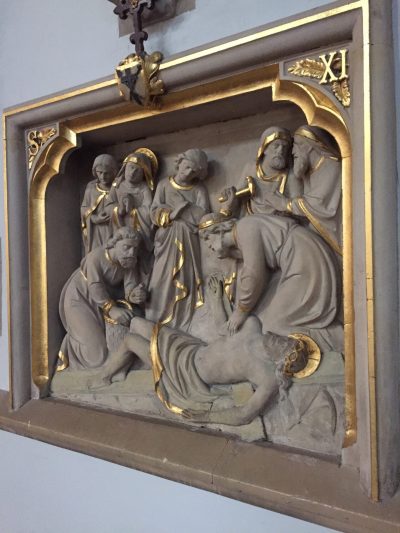 Jesus is Nailed to the Cross

Twelfth Station JESUS DIES ON THE CROSS Mary Magdalene They call me Mary Magdalene. Mine was a difficult and bitter life before I met Jesus. But Jesus looked at me and at so many others with kindness and compassion. He cured out sickness and gave us reasons to be happy. He freed me of the evil spirits that had their hold on my life. How then could I stand by and see Jesus hurting and unable to help himself? I so much wanted to help him but all that I could do is stand next to his cross to the very end. I was there when he cried out: “It is finished.” Then he died. My Jesus stopped breathing. I was there to see the death of Jesus. Were you there too? 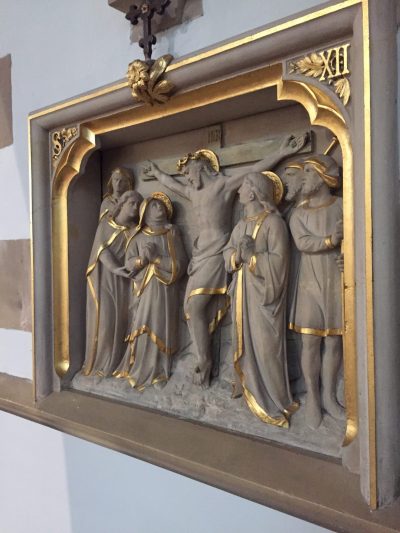 Jesus Dies on the Cross

Thirteenth Station JESUS’ BODY IS REMOVED FROM THE CROSS Salome, the Mother of Two Apostles I am Salome, the mother of the apostles James and John. My son James ran away when the soldiers came after Jesus. But John and I didn’t run away. We stayed near the cross with Mary, Jesus’ mother. I did not understand why Jesus had to suffer. it was only later on that I saw the light. But on that Friday evening, I knew I had to be there to help them to comfort his poor mother who had lost her only son. Most of Jesus’ friends ran away, but Jesus forgave them. Would you have run away? 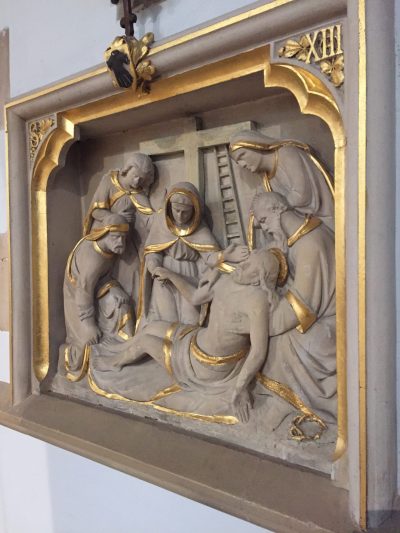 Jesus is taken down from the Cross

Fourteenth Station JESUS’ BODY IS PLACED IN THE TOMB Nicodemus, the Good Pharisee I am Nicodemus. I helped my friend Joseph put the body of Jesus in a brand new tomb in a nearby garden. Joseph was braver than I was. He had the courage to ask the Romans for the body. I was always afraid of something. I became a follower of Jesus, but in secret. I came to him only at night so that no one would know I was on his side. After the crucifixion, I was no longer afraid. I was angry and ashamed of myself for not stepping forward earlier to defend Jesus. I helped lay Jesus’ body in the tomb. At the time, I did not know it would be there for such a short time. 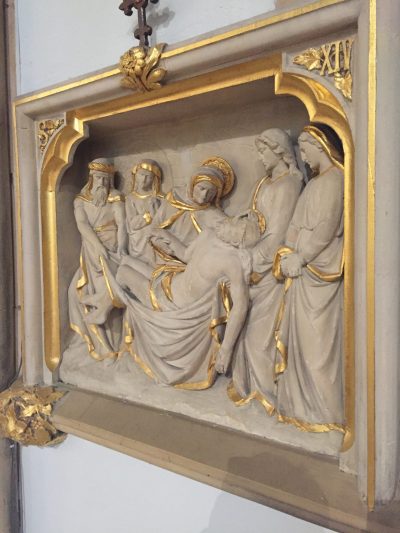 Jesus is Laid in the tomb

Download and print this: Colour in as you journey through Advent 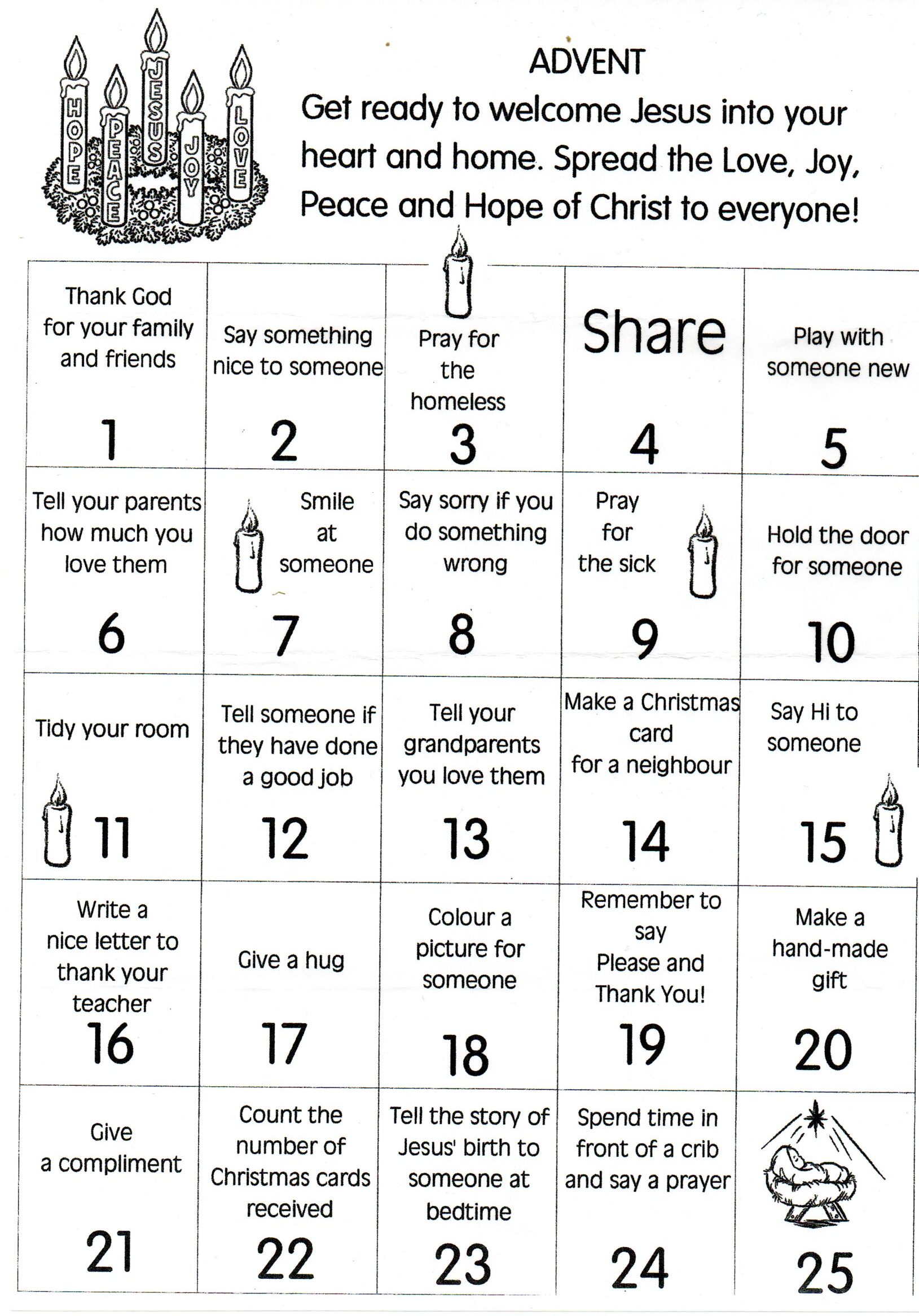