St Wulstan became a Benedictine monk at Worcester Cathedral priory, and later was made prior. He reformed the monastic observance, and became known as a preacher and counsellor.
In 1062 he became Bishop of Worcester and combined effectively the tasks of monastic superior and diocesan bishop. He is the first English bishop known to have made a systematic visitation of his diocese. Together with Lanfranc he was instrumental in abolishing the slave trade from Bristol to Viking Ireland, and later he supported Lanfranc’s policy of reform. He built parish churches and re-founded the monastery at Westbury-on-Trym. He insisted on clerical celibacy, and under him Worcester became one of the most important centres of Old English literature and culture. He was known for his abstinence and generosity to the poor.
After the Norman Conquest he remained one of the few Englishmen to retain office. In the Barons’ Rising he was loyal to the Crown and defended the Castle of Worcester against the insurgents. He was buried in his Cathedral, and his cult began almost at once. He was canonised in 1203 and his feast was widely kept in monastic and diocesan calendars. 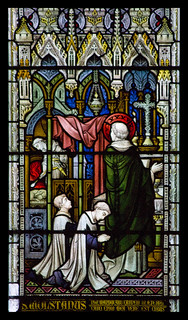 St Wulstan and the Goose - Window at Downside Abbey

In the Chapel of St Oliver Plunkett at Downside Abbey, a stained glass window depicts a less official story concerning Wulstan: that one day, whilst celebrating Mass, he was distracted by the smell of roast goose, which was wafted into the church from the neighbouring kitchen. He prayed that he might be delivered from the distraction and vowed that he would never eat meat again if his prayer were granted.
The modern world needs stories like this more than it realises. The watered-down puritanism that serves so many of us as a moral code today equates pleasure with evil – cream cakes, the advertisements tell us, are “naughty but nice”.. or even “wickedly delicious.” Messages like this are a libel on the name of God, who created the pleasures, and on his Son, whose first recorded public act was turning water into wine. There is nothing wicked about delicious food in itself, or in any other pleasant or beautiful thing. Let us enjoy God’s creation all we can and rejoice in its creator as we do so, and if, like Wulstan, we have to deprive ourselves of something for our spiritual or bodily health, then let us suffer our deprivation cheerfully, blaming the weakness in us that made it necessary. Let us never devalue our sacrifices by denigrating the things we sacrifice, or the sacrifice will be pointless. Let us remember what God did, day after day, as he was creating the world: he looked at it, and saw it, and behold: it was very good.

A God of Surprises! Through Samuel, God chooses the young child David to be the anointed King of his people. Not the most obvious choice - but then that simply means that we did not look upon the many older, wiser, stronger candidates in from the same viewpoint as God did! This often happens in our world today. One good example is the election of a new Pope - often surprising us, and at least in my lifetime, always completely the right person for his time!

David's anointing is recorded three times in the Old Testament - and this one, in Bethlehem, is not referred to again in scripture. The other two are later, and take place when David is anointed King over the Southern Tribes (at Hebron, 2 Samuel 2.4) and later, the Northern Tribes (2 Samuel 5.5). Why might David have been anointed three times? This is an example of Typology - the Old Testament foreshadowing the New. David was anointed by Samuel, foreshadowing the baptism of Jesus by John, at which God says this is my Son, the Beloved. (David means Beloved, and Samuel means taking the name of God). The second anointing, by Joshua (praise) foreshadows the recognition of Jesus as King by his followers. And the third anointing, by Jabesh-Gilead (perpetual fountain) foreshadows Jesus' promise of perpetual nourishment (for example, offering the woman at the well, a drink that will never leave (us) thirsty again.

Each one of us, at our Baptism, was anointed with oil, as was David, and washed with the same water of life from the eternal spring Jesus set for us. Let us rejoice and be glad!

The Nationality and Borders Bill

Following up on the St Gregory’s Advent Prayer Service with the focus on refugees and asylum seekers, and the meeting beforehand between Alex Chalk MP and some of the refugees in the town whom Parishioners have been helping, a further meeting has now been arranged with our MP. This takes place online on Friday 28th January, 9.30-10am. The objective is to discuss how the provisions of the Nationality and Borders Bill are likely to affect those fleeing persecution in future, and linked issues. If you wish to take part in this Zoom meeting (you do not have to speak unless you want to), email Bill Flynn (flynn.bill1@gmail.com) or Martin Davis (cheltlaudatosicircle@gmail.com).

St Antony is the originator of the monastic life.
He was born in Egypt: when his parents died, he listened to the words of the Gospel and gave all his belongings to the poor. He went out into the wilderness to begin a life of penitence, living in absolute poverty, praying, meditating, and supporting himself by manual work. He suffered many temptations, both physical and spiritual, but he overcame them. Disciples gathered round him, attracted by his wisdom, moderation, and holiness. He gave support to the victims of the persecutions of Diocletian, and helping St Athanasius in his fight against the Arians. He lived to be over a hundred years old, and died in 356.
Must we follow St Anthony's example and give over all we have?
Jesus often has confrontations with the Pharisees. These can be about many things but so often, as we see in today's Gospel, we see Jesus confronting hypocrisy. The Pharisees were very resistant to change, and would insist on all the old rules being observed, whatever the cost to those in their thrall. But Jesus would have none of this - new wine, new wineskins - a new way of life, needs new rules. Jesus also said that not one jot, not one iota of the old covenant would be swept away (Matthew 5:18) - contradicting himself? No - as what Jesus was warning us about is the slavish application of rules irrespective of the effect of them on those applied to - not the rule itself.
In this week of synodal activity, let us pray for the grace to hear each other, listen deeply, and for the time to participate in the meetings, both actual and virtual.

As yet the Heating engineers have been unable to repair the heating system. Efforts are taking place to install temporary heaters, which will make a little difference, but please be prepared to wear warm clothes in case!

Saul is thought to be the most suitable man to be king because he looked like a king: handsome, taller than anyone else, and strong. As Samuel anointed him he declared that Saul would be able ‘to save’ the nation of Israel ‘from the power of the enemies surrounding them.’

How much different is God’s own choice of king for his people: ‘Without beauty, without majesty we saw him; no looks to attract our eyes; a thing despised and rejected by men, a man of sorrows and familiar with suffering, a man to make people screen their faces; he was despised and we took no account of him.’ [Isaiah 53.2-3] Saul’s kingship will ultimately come to a disastrous conclusion, but the Man of God’s own choosing reigns as King for ever and ever. [Apocalypse 11.15] This everlasting King calls us each and all to be loyal to him and to find in him salvation from the power of every enemy.

The cry of the people to Samuel was ‘Give us a king like other nations have!’ That cry was a blasphemous denial of the Kingship of God, and a faithless denial of God’s choice of this people for his own. [Exodus 6.7; Deuteronomy 4.8] Samuel went so far as to declare the request ‘a very wicked thing.’ [I Samuel 12.17]

Nevertheless, Israel as a confederation of tribes, each with its own leadership, was no match for the strength of the nations and empires that surrounded it. The word monarch literally means ‘one ruler.’ A king is a unifying force, drawing the hearts and minds of the people together by drawing them to himself. Though the history of the monarchy in Israel will prove a disaster (and the books of the Kings appear to have been written by someone whose outlook was hostile to the monarchy) nonetheless it is presented as a virtual inevitability, a necessary stage in the development of God’s chosen people as a nation.

There is an urgent need to set up a means of organizing donations of clothing and personal items for asylum seekers.
Adele Owen of Garas has asked if there is anyone within our community who is available and willing to take on this responsibility in a volunteer role for the next 3 months.
Before an appeal is made for clothing there is the need to:
This will involve having a large enough space and enough people to do the sorting of the clothes.
Although specific items and sizes will be specified, experience shows that whenever an appeal for clothes is made there are a lot of donations that are not suitable for various reasons. Sorting is therefore likely to be a sizable task.
Offers for the following are therefore welcome:
If you would like to help can you please contact Bill Flynn at:
flynn.bill1@gmail.com

God’s condemnation of the house of Eli [I Samuel 3.12-14] is enacted in a dramatic way as an emboldened Philistine army defeated Israel in a kind of blitzkrieg and captured the Ark as well. The two sons of Eli died, and shortly afterwards the 98-year-old Eli himself breathed his last. [4.18] Almost immediately the wife of Phinehas underwent premature labour and gave birth to a son. She died in childbirth, naming her son Ichabod: ‘Where is the glory?’ [4.19-22]

The prophet Isaiah [43.7] declared that God created humanity for his glory; millennia later
the Bishop of Lyon, St Irenaeus, in the 2nd Century of our era, exuberantly declared that ‘the Glory of God is a human being fully alive.’ The glory of God is his splendour, his radiance; at once it attracts us and astounds us; it makes us want to come near him and at the same time it repels us from his pervasive holiness.

To be fully alive, Jesus reminds us, necessitates first our death [Luke 9.24]—death to our self-centredness, death to our preference for the appetites of the flesh instead of our true hunger for God himself. The glory of God departs from us whenever we choose to be less than God made us to be. The glory of God shines out from our lives whenever like Christ Jesus himself [Hebrews 1.3] we offer ourselves, our souls and bodies, as living sacrifices. [Romans 12.1-2] Pontius Pilate himself unwittingly declared Jesus to be ‘the real man’ [John 19.5]: the truest exemplar of God’s own will and purpose, the radiance of God’s own glory.